"Get a Job"
"King of Fire" was a job for the Cooper Gang in A Cold Alliance of Sly 3: Honor Among Thieves.

After the starting cutscene, you take control of Murray. Jump on the bounce pad that is in front of you, and land on top of the fist-topped pillar. Change into Murray's ball form and bounce from pillar to pillar, pressing

while falling to speed up, and press

when you hit the ground to bounce back to height. Including the first pillar, there are a total of five pillars. The guards on the ground shouldn't pose a problem, as long as you successfully keep your momentum. If you can't reach a pillar, you can continue to press

while falling and try to bounce back up onto a pillar, or you can start over using the bounce pad.

Once you reach the fifth pillar, jump onto the edge of the cliff and run along the path, until you reach a bridge. To the left side of the bridge there is a decorative pillar with a flag hanging on it, walk to this to finish the Murray section of the mission. A cutscene will play, after which you will take control of Penelope's RC car.

, decelerate and reverse with

and fire the turret with

. The turret will overheat if you fire too much, so try firing in short bursts.

Here, you need to shoot seven bamboo stalks. They are fairly easy to locate, they all grow in around the main stone pillar in the center of the frozen lake. The difference between broken and un-broken bamboo is significant, the un-broken is a dark gray color, while the broken is more yellow, with obvious difference being that the broken is separated in two prongs. Another cutscene will play once all seven stalks are broken, and then you take control of Sly.

As Sly, you need to get up to where Murray is, and luckily, the path is straightforward. Jump from the path onto the first of fourteen bamboo points. Don't land on the ice or it will break and you will have to start over. You can use the rocks that are frozen into the lake to return to the starting point if you happen to fall and land on one.

above a blue sparkling point, a short cutscene will play. You must now jump into Murray's arms by jumping and pressing

to launch Sly into the air, and press

to land on top of the banner pole. Smack the supports to loose the fireworks. After this, Murray will move to the next place. Repeat the process, after which a cutscene will play and you take control of Bentley.

Bentley's section, while short, isn't necessarily simple. You must shoot the fireworks on the pinwheels; the first will be stationary, but after that, the wheel will spin faster and faster. To shoot the second firework, fire a dart immediately after your reticule is passed by the fire of the first. The third can be hit by shooting when the reticule is passed by the middle section of the second firework.

After you get on pinwheel spinning fast enough, Bentley's binocucom will zoom out and you must repeat the process for the second pinwheel. After getting both pinwheels spinning at maximum velocity, a cutscene will play, and you will take control of the Guru.

behind his back and jump the guard onto the house near the cliff that Murray first landed on. There are an infinite amount of guards, so if you smash one into the building, or run it into the water, you can just possess another. Remember that the Guru can't fight in any way, so if you get caught in a guard's flashlight, hold

to turn into a piece of the environment.

Once you successfully jump a guard onto the roof, jump off it's back by pressing

. You can now light the two fireworks that are on the roof by pressing

In the Panda King's mind, you must fight him in a similar way to the first game. Dodge the Flame Fu attacks by jumping and running around the center. Make your way up to the Panda King to initiate the fight. When the Panda King raises one hand above his head, and lifts up his leg, wait til he attacks, then jump over his arm. If he holds both arms up, palms out, you can dodge the attack by standing directly in front of him. One arm raised can be dodged by running to the side. Continually attack him whilst dodging the attacks until he bounces you away.

You now must choose what dialogue you want to say. Choose

"Make him sad". This will complete the mission. If you would like to continue fighting, use different dialogue. 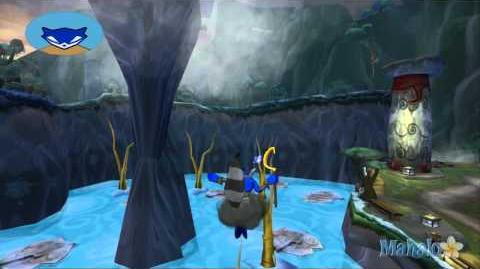