"Hungry Croc"
"Lemon Rage" was a job for Sly Cooper, Bentley and Murray in Rumble Down Under of Sly 3: Honor Among Thieves.

When you go into the bar, the miners refuse to leave, and challenge you to a lemonade drinking contest. Mash

Once you are done with the contest, the miners say that the Cooper Gang cheated because Bentley spilled more than he drank. You then get into a brawl with the miners, where you control first Bentley, then Sly, and finally Murray. Kill all the guards in the area. The guards turn on an electric fence, try to use that to your advantage.

A big guard wearing the Mask of Dark Earth appears and smashes the fence. Control will switch to Sly. Lure the beast towards Bentley's bombs and Murray, who is holding a barrel to throw. Once the boss is stunned, whack him with your cane. Do this until the bosses health is gone, at best three cycles. Mission complete. 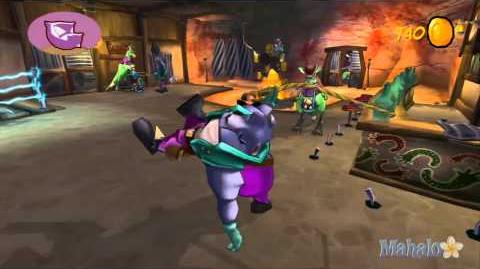