"Battle on the High Seas"

"Carmelita to the Rescue"

Taking Out the Trash
Defeat LeFwee.

"Operation: Reverse Double-Cross" was a job and operation for the whole Cooper Gang in "Dead Men Tell No Tales" of Sly 3: Honor Among Thieves.

You must attack LeFwee and destroy his ship's mast with your ship, then ram his ship and jump aboard. Sly then goes head to with LeFwee in pirate talk. Beat him to find out that Penelope is in Skull Keep.

Sly jumps off of the ship and control will switch to Murray. Row past all of the mines to the dock. Control will switch back to Sly, and you must run up to Skull Keep. After making it up there, it is revealed that Penelope isn't in Skull Keep and that it was a trap.

You must now control the ship after Bentley tricks LeFwee into following him into the deep waters. You now take control of the Guru as he controls the Crusher and must defend Bentley from pirates that try to attack him as he breaks open the locks. Penelope, who was below deck, is then freed. LeFwee now shows up and threatens Bentley. Sly then shows up and bumps them, knocking Bentley over and falling into the ocean. Bentley calls for the Guru to save him.

LeFwee comes in to finish Bentley, but Penelope doesn't allow him to. Attack LeFwee using

to jump, duck and move closer;

to attack low; and

to attack high. LeFwee has tells that allow you to see where he will attack, and how to attack him while he bows. Knock him down several posts, until he falls into the ocean. Mission complete. 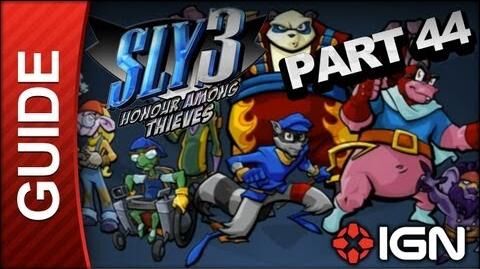