"Guard Duty"
"Run 'n Bomb" was a job for Sly Cooper in "An Opera of Fear" of Sly 3: Honor Among Thieves.

When the mission starts and the cutscene ends, you take control of Sly. Run as quickly as you can across the bridge near you, and then head towards the marker, behind the flashlight and rooftop guards. The timer gives you just enough time to run to the anchor as long as you are sprinting. Don't worry about the guards, they will be taken out in the blast. Head back to the firework stand.

The next explosive is then given to you. Once you have control of Sly, run straight ahead, as he will already be facing the way you need to go. You will soon come to a large bridge, cross it. Once you get across the bridge, head for the stairs. Run across the bridge until you can jump off the right side. Run towards the fountain and take a left around it. You will arrive at the anchor point with seconds to spare.

After the cutscene, go forward off the edge of the building, into the town square. Face the tower. On the side adjacent to the side facing the water, there will be a planter and a crank. Jump on top of the planter, then jump and press

to latch on to the wall hook. Pull to the left, and then release with a press of

to grap onto the hook. Swing until you feel comfortable with the momentum and jump to the flag holder. Jump from this to the next wall hook. Pull down and launch upwards towards the outstretched flag pole. The flag pole will bounce you right off, so head to the left, where there will be another flag pole, then a balcony.

To the left of the balcony will be two more flag poles, and then a water pipe. Climb up the water pipe, which leads you around to the opposite side of the tower. There will be a pole sticking out from the tower with a yellow tip, jump to it. This will not bounce you automatically, so jump over to the stone point coming from the corner. From this, there will be an edge to sneak along, so make sure to hold

. Another stone point is at the end of the ledge, and after that, and hook. From this hook you swing towards a pipe coming off of Octavio's moving arm. As you climb up the pipe, Sly will overweight it, so it will swing around. If you jump at the right time, you can Ninja Spire Jump on top of the cigar, but if you miss, Octavio's sign has a button on its jacket that can be used as a wall hook. Once you sit on the cigar, take a swing at Octavio's face, which will cause the sign to explode, and the balloon to fly free.

After the cutscene, run back to the firework stand. There is no time limit, so take whatever path you want, just follow the waypoint. After you arrive, a cutscene will play, and you must now chase Octavio. It isn't too difficult, just follow the gold sparkles. All you have to avoid is the lasers that he activates, shoot left to right, and guards that will come after you every few seconds.

He rounds the corner of the firework stand, where a laser is. Run down this street and avoid a second laser until Octavio jumps down to the left. Guards will be trying to attack you the whole time, but you don't need to fight them, just give them a wide berth. Octavio will then run across a small bridge, which has a laser at both the entrance and exit. Jump on top of the bounce pad to launch up onto the building, then jump across the street to the next building. Leap slightly down onto an awning, which will launch you up onto the next building.

From here, jump down to the road, which has another laser. Right after the laser there are two awnings to the right of the bridge. Bounce up them onto that building. Jump down onto the lower building, then to the road, where there is another laser. You now leap across the canal, landing near the broken ferris wheel. Run through or around the Ferris wheel, then jump onto the cart, then up to an awning. You might be close to Octavio now, but attacking him does nothing. Run across the roof, then jump down to the bounce pad and up to the building across the road. Off to the left of this building, you can either jump down onto an umbrella and then bounce onto the top of the stage, or you can use rail walk on the rope to get to the stage. You don't even have to land on the stage, instead, you can run right through or past it. Turn right onto the small bridge and avoid a final laser. Turn right towards the entrance of the opera house, where the mission is complete. 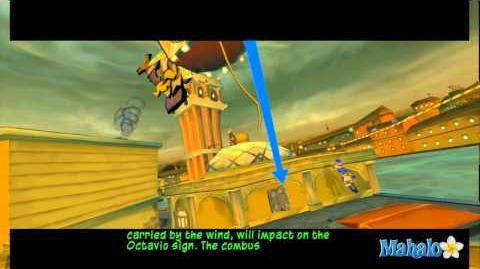