"Search for the Guru"

"Dark Caves"
"Spelunking" was a job for Murray in Rumble Down Under of Sly 3: Honor Among Thieves.

Get up to The Guru by doing some spelunking through the caves.

Watch the binocucom chat, then go inside the cave, then throw rocks or guards into the two stalagmites. Go further into the cave, take out the flashlight guard and destroy the third stalagmite. Then, head to the piston. Go into ball-form and jump on the piston until it is pressed all the way down and its light turns green. Then go inside and press on until you get to the next piston. This time, there are three pistons and all of them must be smashed down to open the door. After that, go into the next room and see where a kangaroo guard wearing the Mask of Dark Earth is. Fight the guard by throwing him into the three drills. This will unlock the door and you can go through it. After the following cutscene plays, the job is finished. 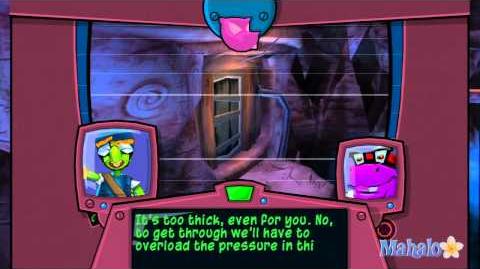