This mission is completed using Murray and Bentley. Soon after Sly enters the gauntlet of the Cooper Vault, Bentley and Murray are attacked by Dr. M's goons. You now take control of Murray. The guards that attack first are Cobra-Tiger-Frog Mutants. They have two main attacks; a headbutt that also drops dynamite, and a scream (similar to Octavio's singing attack) that shoots rings that you must dodge. They can also unleash a smoke bomb.

After a wave of these, new enemies are added. They are Alligator-Crab-Kangaroo Mutant. They attack with an uppercut, as well as a counterattack after blocking. Try to guide enemies into the Tiger Cobra's dynamite, as it will do damage to them. After beating this second wave, Dr M. drops from above. Dr. M. and Murray lock arms and fight in the center of the arena. You now control Bentley. Jump from the center platform onto one of the raccoon statues. Grab the piece of treasure and return to the center arena to place the treasure onto Dr. M's back. The raccoons will now shoot electric lasers at Dr. M. Continue this process, placing all of the treasures on his back. Partway through, the large Elephant-Gorilla-Bat-Horse Mutant will drop down and shoot at Bentley, so hide behind the head of a raccoon statue and throw down a Grapple-Cam, using this to take out the flashlight guards. Placing the final treasure on Dr. M's back will complete the mission. 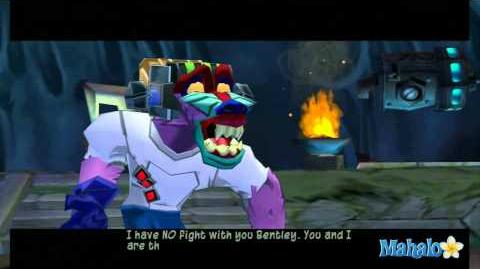