"Lemon Rage"
"The Claw" was a job for Sly Cooper and Murray in Rumble Down Under of Sly 3: Honor Among Thieves.

Use the SuperClaw 10,000 to protect Murray and the power stations.

When the mission starts, you take control of a crane. Use

to move the claw around, and press

to pick up and release items. When the cutscene end, Bentley will give a small tutorial on the claw. First, maneuver the claw over top a rock, pick it up, and then drop it into the hole directly in front of the crane. Use the shadow to determine exactly where you are positioned above the hole. Next, pick up another rock, then throw it at the electric fence across the water using

. Pick up another rock, and throw it at the fence to continue.

can also be used to throw.

This part is very similar to the previous, but you do not have rocks to crush the guards with, so you must rely on throwing them into the electric fence, dropping them into the pits, or dropping dynamite on them, of which there are only five. When you finish this section, pick Murray up and carry him to the right, across another river.

Here, you must both defend the power stations and drop flint rocks onto the end of a catapult, which Murray will launch towards each rig, causing the sparks to light the oil on fire. You must drop a total of six rocks onto the catapult, one for each rig. After completing this section, a cutscene will play, and the mission will be complete. 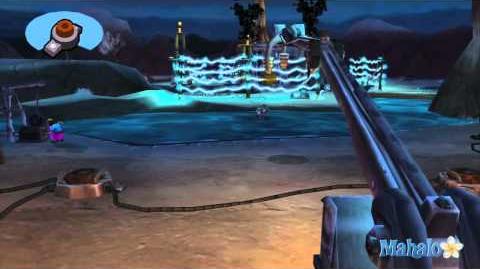