"Beginning of the End"

The Vault
Complete the prologue.

"The Cooper Vault" was a job for Sly Cooper in "Beginning of the End" of Sly 3: Honor Among Thieves.

After the cutscene, walk toward and jump (

) on top of the truck. Jump and press

to walk on the rope. Head left on the top of the wall, and jump onto the metal pipe. After sliding down it, go near the ledge below the guards. A chopper will appear and pull the pillars down.

After crossing the ledge, jump on to the rock and wait for the antenna to fall. Run across it, then jump up the ledge near the pumps. Drop down to the fan below. A rocket will appear and drop a cage down onto the vent to open it. Drop down into the vent and walk through the cave, avoiding the three electric currents. Press

to break through objects. At the end of the cave, hit the fan several times to break it. Walk out onto the cables and wait for the lasers to get deactivated, then continue and wait again for the next set of laser to get deactivated. Then jump on top of the elevator. Once Dr. M and Richards get onto the elevator, it will begin moving. During the ride the code "1-2-3" will be said. When the elevator is at the top, another cutscene will play.

Walk up the rope, then hold

to sneak around the ledge. Jump onto the pump and land on the roof, then an alarm will sound. Walk along the first rope, then jump to the second rope. Stand near the tumblers and press

or the face buttons (

After the next cutscene, jump back on to the rope from before and run along. Watch out as the bolts that are being fired can hit you. Run along the next two ropes, then jump down the elevator shaft filled with lasers. At the bottom, jump across the debris floating in the water and bounce on the pump. Sprint through the tunnel and jump out of the end. Another cutscene will play, after which a boss fight begins. Rail Walk on the pole and wait for the boss to hit the ground twice before hitting Dr. M, who is attached to the monster's collar. The boss will hit you back across the chasm (though you can easily avoid this). Repeat the process, then a cutscene will play. Job complete! 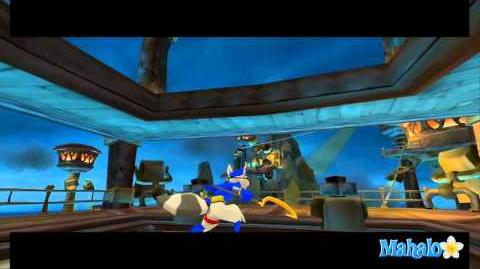