"Crusher from the Depths"

"X Marks the Spot" was a job for Sly Cooper in "Dead Men Tell No Tales" of Sly 3: Honor Among Thieves.

Use the Treasure Map to find and unearth the deep sea diving equipment of Dimitri's grandfather, Reme Lousteau.

Go to the job beacon and Bentley will start giving Sly the overview of the mission. As Sly, paraglide over to the jollyboat and control will switch to Murray. Row the boat to the ship while avoiding the mines in the water. You must climb aboard and silently take out three guards using the Silent Obliteration move. After the cutscene, control switches to Sly and the ship. You can move around as Sly, but for steering the ship, use

to steer left and

to steer right. Steer the boat to the mouth of the harbor.

Once you are out in the open, the controls are still the same. Click

to bring up the map. There is a red "X" on Dagger Island, so head over to that location. Once you get near the island, you will approach a ship and a battle begins. Press

near a cannon to fire it. Once the mast is down, you can either choose to sink it with another cannon, or you can jump onto the ship and raid them for treasure by defeating the captain. After that, head to the location marked on the map.

You are now on Dagger Island and control switches to Sly. Bring up the Treasure Map by pressing

. Head to the statue's gaze to get more clues. On your way there, keep an eye out for the near-sighted lizards Bentley warns you about. You can take them out before starting the treasure hunt, to avoid possibly having to deal with them later.

Once you stand by the statue's gaze, press

to bring up the map and get the next clue. Click and hold

to scan your immediate area to find specific structures or areas mentioned in the clues. Once you get the right number of paces, press

to get the next clue. Use these clues to get to the beach with rocks spelling "SOS." Once you find the treasure and watch the cutscene of them opening the treasure and Penelope getting captured, the job is finished. 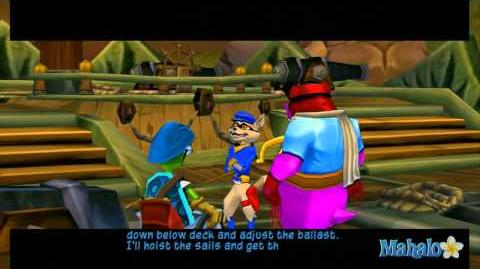 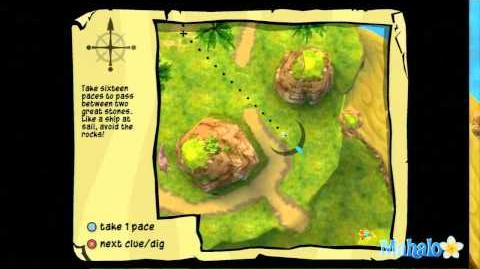