Haiti
Water rats, also known as Mojo Dupree, were enemy guards encountered in "Vicious Voodoo" of Sly Cooper and the Thievius Raccoonus. They were employed by Mz. Ruby to protect her lair from possible intruders.

They were tall, brown rats that served as Mz. Ruby's flashlight guards. They wore black pants with a red band, a necklace made out of bones, a candle in their heads and two orange bracelets on their left arm. They carried a staff with a skull on top that emitted a powerful light, which the voodoo mystics used to spot intruders. If they spotted an enemy, they would use their voodoo magic to defeat their foes.

Sly's binocucom states that they enjoy golf. In relation to this, they taunt Sly by using their staff as a golf club and the voodoo orb as a golf ball. Their last name could indicate a possible relation to Clarence Dupree, the mosquito. 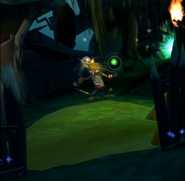