Sly Cooper Wiki
Register
Don't have an account?
Sign In
Advertisement
in: Guards in Tide of Terror

Isle of Wrath, Wales
Welding walruses (also known as Pyro O'Connell) were enemy guards employed by Raleigh to protect the Isle of Wrath from possible intruders.

These walruses wear yellow T-shirts and blue overalls. They use welding torches as weapons against their target. They were also apparently hired to repair cracks on the metallic pipes on Raleigh's boat. If a welding walrus successfully lands a hit on its foe, then he will quite literally breath fire and then cover his mouth to burp.

With the Computer Hacking technique acquired, Sly Cooper's binocucom states that they love to cook Flambe, and the scientific name for their species is spitium flamius. 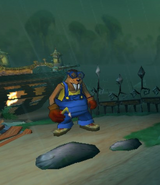